This is an 'dishonest casino' example from Durbin, et al. 'Biological Sequence Analysis' book. A casino used two types of dice: one is a 'fair' one that has equal chance to all six numbers, and the other is a 'loaded' one that has high chance of number 6 than the others. We have a sequence of dice numbers from the casino, and want to estimate when a dealer exchanged the dice.

We assume that the Hidden Markov Model of this example as below: 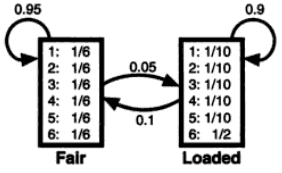 Assume that we observed the following numbers from the casino: 22653245666

There is no 'begin' state in our model, so we will start our calculation at the second observation (this is the first order HMM, meaning that we need a 'previous state/observation').

This is the most famous HMM application in biology. Developed by Sean Eddy (the author of many 'primer' series used in our class, and one of co-authors of 'Biological Sequence Analysis' textbook). Many 'sequence-based' domain information is originated from the database called Pfam, and this program is a core of Pfam construction. Also, the program is very mature, well-documented, so you can easily make your own 'profile family' when you have multiple sequence alignments.